Nickelodeon and Paramount+ are bringing Mattel‘s horror inspired Monster High dolls to life this fall in Monster High: The Movie, and they recently shared a teaser trailer and character posters for the television film. The teaser introduces us to the concept of a “monster world” vs the human world, following Clawdeen Wolf and friends on their first day at Monster High. The movie will follow Clawdeen as she finds a place for herself in Monster High, but when a secret devious plan threatens the school, she must learn to accept and embrace her monster heart to save the day.

In 2021, Collider reported on Monster High: The Movie‘s first production announcement and casting. Just days ago Paramount+ shared to their Twitter page a brand-new teaser trailer that heard the girl’s quipping about their upcoming first day at Monster High. We hear Clawdeen Wolf lament that she’s been living her whole life in hiding, and that her new enrollment with Monster High offers her a chance to finally be herself. Fans also get to see a shocking glimpse at Frankie Stein and her elektrokinesis abilities as she flashes a peace sign over her shoulder, as well as brief glimpses of Draculaura and Deuce. The 30-second clip reveals the haunting entrance of Monster High, it’s pillars and banners and what looks to be a portal connecting the monster world to the human one. We also see the girls dancing in classrooms and graveyards among mummies, but never quite catch a good look at the cast.

Following the trailer reveal, Nickelodeon took to Twitter to post nine character posters, giving the fans what they’ve been waiting for: head-to-toe first-looks. The posters include each of the six original lineup members – known as The Ghoulfriends – Clawdeen Wolf, Lagoona Blue, Cleo de Nile, Frankie Stein, Draculaura and Deuce Gorgon, plus a look at Heath, “The Hothead.” Only two of the adults from Monster High are shown: Headless Headmistress Bloodgood and the introduction of an all-new character Komos, “The Creature Teacher.”

Monster High was first introduced when Mattel launched their eerily fabulous dolls in 2010. The franchise aims to bring the horror genre to younger generations, introducing them to the kids of the classic monster movies of old, such as werewolves, mummies, sea monsters and zombies. Monster High has expanded to movies, books, comics, over 750 dolls and more, including spinoffs like Ever After High, since its conception over two decades ago. Similar to Nickelodeon’s 1990 television series Are You Afraid of the Dark? and R.L. Stine‘s Goosebumps series with a My Little Pony spin, Monster High provides younger audiences a friendlier gateway to horror, and the series puts heavy focus on inclusivity and acceptance. Some of the dolls’ slogans have been “Be yourself, be unique, be a monster!” and “How do you Boo (Be out of the ordinary)?” up until 2016, then received a reboot in 2020 with their “Skullector” series when “Everyone is Welcome!” became their present-day slogan.

Monster High: The Movie is directed by Todd Holland whose other credits include directing for the television series Black-ish, Unbreakable Kimmy Schmidt and Disney+‘s Love, Victor. The story is written by Jenny Jaffe (Big Hero 6: The Series) and Greg Erb (The Princess and the Frog) and adapted to teleplay by Billy Eddy and Matt Eddy who both wrote for the Disney Channel original Zapped starring Zendaya.

No official release date has been set, but Monster High: The Movie will premiere on Nickelodeon and be available for streaming on Paramount+ later this fall. You can check out the character posters and trailer below:

WARNING: Flashing lights
Some secrets are too eerie-sistable to keep quiet 🌕🎶 @MonsterHigh: The Movie is coming to @Nickelodeon & #ParamountPlus this Fall, for the first time ever in live-action, as a bop-dead musical! 🎬 #MonsterHighMovie pic.twitter.com/yfzhRrOjGG 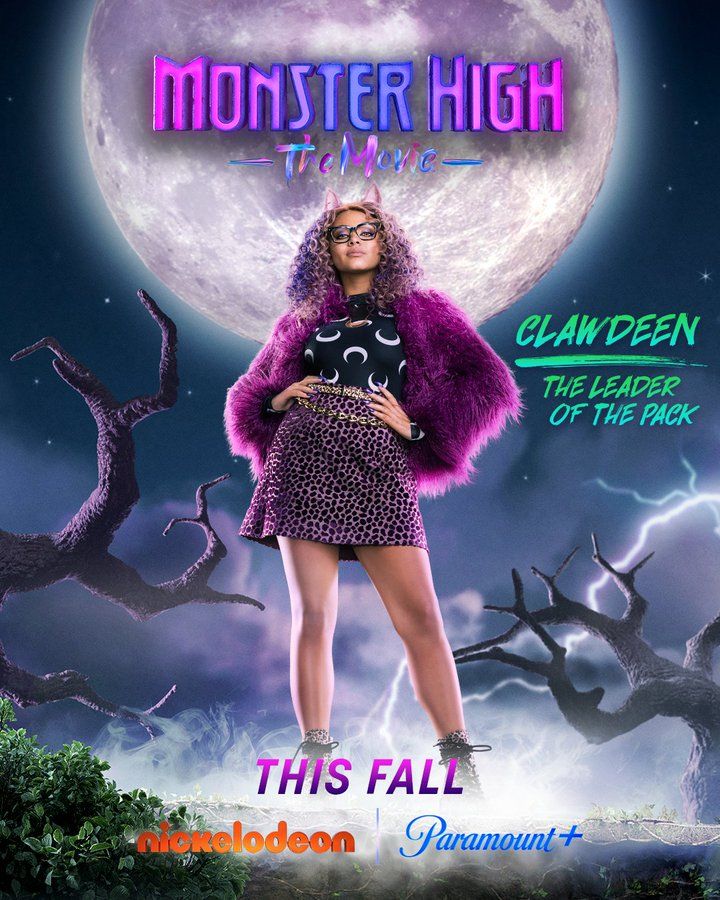