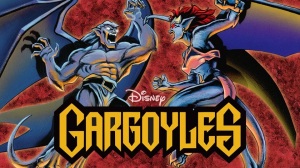 Night is falling, and the time for one of Disney‘s darkest animated series, Gargoyles, to awaken is fast approaching. Amid the excitement rolling in from this year’s San Diego Comic-Con is confirmed news that Dynamite Entertainment has snagged licensing to reboot the series as a brand-new run of comics, according to CB. The comic book publisher will partner with Gargoyles‘ creator and co-producer Greg Weisman to awaken these ancient protectors from their stony slumbers.

Dynamite Entertainment‘s licensing provides the rights to graphic novels and periodical comics that will enable the publisher to work with Weisman on creating a rich new continuation of the 1994 animated series. The series originally aired on Disney Afternoon and ABC with an initial two seasons before undergoing a format update and being rebranded as Gargoyles: The Goliath Chronicles in the third season. Years later in 2006 the franchise saw yet another reboot when Weisman penned an 18-issue comic run for Slave Labor Graphics.

Having said before that he didn’t consider The Goliath Chronicles‘ third season canon to the Gargoyles universe, Weisman continued the comics from the end of Season 2. Even prior to that, while the original series was still airing, Marvel wrote their own 11-issue run that referenced the first season. Still, Weisman did not consider these canon, which begs the question: where will the Dynamite Entertainment comics pick up?

No specific details have been disclosed as far as publishing date or storylines, but Dynamite‘s licensing agreement does include “facsimile reprints,” giving them the ability to reprint the elusive Marvel line. Either direction they decide to go, the intent is to introduce the stone guardians to a wider audience, as well as treat the show’s loyal fans. After becoming one of the streaming service Disney+‘s most popular series, the brand realized the show’s potential, breathing life into the franchise once again. One of the show’s stars, voice of the gargoyle’s staunch leader Goliath, Keith David said:

“You know, those of us who were involved from the beginning… I’ve always wondered why they stopped it in the first place. [We’ve wondered] why we haven’t come back to a reboot. … I mean, I would love nothing more than to revisit Goliath… You know, he was absolutely one of my very, very, very, very favorite characters. I’ve always maintained that when I grow up, I want to be like Goliath.”

Coming from David this is no small praise. The actor and voice actor boasts an impressive list of achievements from Childs in John Carpenter‘s The Thing, Disney‘s The Princess and the Frog, Armageddon, 1988’s They Live, to Rick and Morty and more.

Gargoyles is a darker series likened to Batman: the Animated Series that tells the tale of a family of ancient guardians of a Scottish castle. Loyal to the humans that protect them in equal measure when they turn to stone at dawn, the protectors are cursed and frozen in stone for a thousand years. In 1994, a wealthy CEO, David Xanatos, (Jonathan Frakes) awakens the gargoyles after having them brought to his skyscraper in Manhattan. Once again the gargoyles find themselves at odds with humans, while acclimating to their modern life in New York City, driven to protect humans and their ways of life, but also threatened by those seeking to do them harm.

There is no specific date for the Dynamite Entertainment comics, but they are said to be released in the fourth quarter of 2022. The original animated series of Gargoyles is available to stream on Disney+.