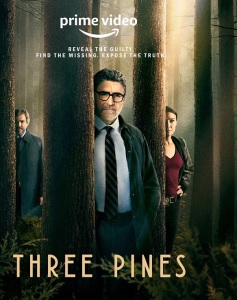 After putting out a teaser a couple of weeks ago, Prime Video has also now dropped the first trailer for their upcoming crime drama series, Three Pines. Set against the backdrop of a laid-back village in Quebec, the series will star Emmy nominee, Alfredo Molina as the detective Armand Gamache who is in the vicinity to solve a murder that soon begins to multiply into an intricate web of long-buried secrets with grim twists.

“You look for good even in the worst of humanity, don’t you?” is the first slightly disconcerting question posed in the over two minutes trailer. Molina’s Gamache does have a response to the inquest, replying, “And sometimes I find it, too.” Chief Inspector Armand Gamache has come to this idyllic town to investigate the murder of a lady, killed somehow in broad daylight, whilst surrounded by people yet no witnesses to the act. He quickly begins to discover that behind the pleasant outward visage, the residents harbor quiet disgust for one another – but that’s not all they are hiding, is it? “Three Pines is a sanctuary, but this place has bad energy,” someone remarks, and with strange markings on walls and people getting snatched at night, this seems a valid fact.

Soon the investigation begins to lead toward long-buried secrets and pain, including that of missing indigenous girls from the area. While Gamache and his team work, they are blindsided by a couple more bodies “Everything is connected, one way or the other.” While murder, according to the inspector, most times happens in “the heat of the moment”, he is determined to uncover what truth there is to be found and another seeks to convince him that there is more to the Three Pines than just murder. As with entrenched evil, there is sure to be a pushback when light seeks to root it, but while the harbinger of that light works, he must be wary of what personal ghosts he might awaken in his quest. However, he must scratch beneath the serene surface and unearth the truth beyond.

Three Pines premieres on Prime Video on December 2. Check out the trailer below: