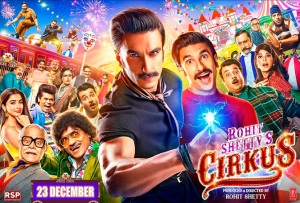 Synopsis – Two sets of identical twins are separated at birth. Several years later, when they are coincidentally in the same town, there is a lot of confusion and misunderstanding when people mistake them for each other.

My Take – With four Golmaal installments, and films like All The Best (2009), Bol Bachchan (2012) and Chennai Express (2013) in his kitty, director Rohit Shetty has well established himself as one of the biggest commercial directors of our time, who specifically specializes in a certain kind of humor. Naturally his every new release comes with certain expectations.

Promising yet another colorful and crazy entertainment, his latest seeks inspiration from Gulzar‘s Angoor (1982), which itself was based on Shakespeare‘s play The Comedy of Errors. But while he is armed with a hilarious plot, his film, unfortunately though is not.

Despite being led by two Ranveer Singhs for the price of one, with one granted the superpower of absorbing electricity, the film is surprisingly substandard. Similar to most Rohit Shetty features, this one too has lavish sets, a big scale and a cast made up of some of Indian cinema’s funniest comic actors, but everything goes to waste because they are backed by a hackneyed script that is devoid of the wit and the sophistication these kind of films require to pull off.

Everyone is trying to be funny and it’s evident they are trying hard, but whatever they do, the jokes and the humor just don’t land. From its writing to performances, music, and direction, the film is one of the biggest disappointment of the year that nobody expected.

The only thing that actually works here is Deepika Padukone and Ranveer Singh‘s sudden impromptu jig in the middle of the film. The biggest problem with this failing is no different from the drawback that most Hindi films are undone by these days. It has no respect for the audience. The anything goes approach to film making springs from a combination of creative bankruptcy and complacency.

There’s also a shout-out to Golmaal Again (2017) at the end of the film which feels like a desperate attempt to do some fan service, but speaking as a Rohit Shetty fan, I think we deserve better. 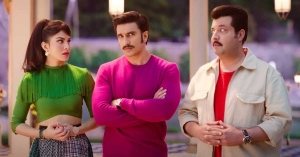 Beginning in the 40s, the film sees Roy (Murali Sharma), despite objection from Joy (Uday Tikekar), the founding member of the Jamnadas orphanage, swap a pair of twins as an experiment to prove his theory of how upbringing matters more than bloodlines, and sails the two sets off to two separate families, one a rich family settled in Bangalore and the other a middle-class family who runs a circus of their own in Ooty.

Fast forward to the 60s, the story then follows both pairs of adult Roys (Ranveer Singh) and Joys (Varun Sharma). While Roy 1 in Ooty is married to Mala (Pooja Hegde) and has taken over the circus business, while gaining fame himself as The Electric Man for his ability to consume electricity without any harm, Roy 2 lives in Bangalore and is looking to marry Bindu (Jacqueline Fernandez), and doing his bit to expand the family business run by his mother (Ashwini Kalsekar).

Meanwhile, both Joys are happy being the third wheel to everywhere their brother goes. However, when one pair of Joy and Roy travel to the town of the other pair, needless to say, it leads to a lot of confusion, misunderstandings, and chaos.

Based on its basic premise itself, this should have been a laugh riot as the identical twins and the case of mistaken identities can lead to a host of ludicrous situations. Yet, the film is abysmally bad. Collectively, barely a scene or two manage to evoke the kind of laughter we are used to experiencing in a Rohit Shetty film.

The film has one foot planted firmly in the past, which by itself is not such a bad thing. It makes a song and dance about the debt that it owes to comedy films of yore. But with no real imagination on display, the film demonstrates what is amiss with contemporary Hindi films that are aimed at giving a mass audience its money’s worth.

The film sees one Roy dramatically make two live wires kiss each other, with his bare hands. But every time he does that his twin experiences a massive electric shock and so does anyone who touches him. All is well with him once the act is over. If you can get past this, then you’d perhaps have a little less discomfort in sitting through the rest of the plot that involves caricatures, good actors wasted in stereotypical characters, unfunny dialogues, and situations that literally go nowhere.

The screenplay offers nothing fresh in terms of comedy and punchlines and suffers from abject repetition. Though there are endless characters in the film. Each one more colorful than the other. And everyone is overacting beyond one’s imagination. There are some bad men too, extremely funny looking ones and they don’t even make you laugh. Rather they start looking annoying after a point. With so much happening and everyone trying so hard, comedy is nowhere to be seen or felt.

Performance wise, Ranveer Singh is somewhat restrained here and is doing whatever he can to do but the impact is totally missing. He is trying to be funny and it’s evident but his jokes, whatever little there are, are a serious miss. Plus, the two roles that he is stuck with are awfully insipid. Even the usually chirpy Varun Sharma looks like he is sleepwalking through his scenes. Pooja Hegde looks gorgeous in her somber role, while Jacqueline Fernandez brings her usual glam quotient.

In supporting roles, Sanjay Mishra and Siddhartha Jadhav make up for the lack of writing, while Murali Sharma, Johnny Lever, Anil Charanjeett, Tiku Talsania, Vrajesh Hirje, Vijay Patkar, Mukesh Tiwary, Brijender Kala, Radhika Bangia, Ashwini Kalsikar and Sulabha Arya struggle to deliver. On the whole, ‘Cirkus’ is an unfunny comedy that fails to put its characters, colors and chaos to good use.