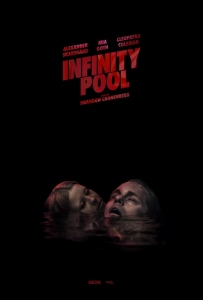 Although the calendar has changed to 2023, Mia Goth‘s reign over the horror genre isn’t ending anytime soon. While we wait for the actress to reprise her role as Maxine in Ti West’s X trilogy capper MaXXXine, Goth will hold horror fans over with Brandon Cronenberg’s crazed mind-bending thriller Infinity Pool. The film releases at the end of January and the first trailer left a devilish mark on genre fanatics everywhere with one haunting laugh by Goth. Now Infinity Pool’s new character posters get us up close and personal with everyone tangled up in Cronenberg’s latest nightmare.

The four character posters feature Goth’s Gabi, Alexander Skarsgärd’s James, Cleopatra Coleman’s Em, and Cronenberg’s signature horror featuring an unknown character in a creepy Texas Chainsaw-like skin mask. The film follows James and Em just trying to enjoy the perfect island vacation, but this is a horror movie and vacations never stay sunny for long. When they meet Gabi and get involved in a tragic accident, they’re forced into a violent society where they can either clone themselves or die for their crimes.

From the trailer released last month, this looks like another wild film from Cronenberg with a ton of disturbing imagery and classic body horror which the director’s famous lineage is known for. While Brandon’s father David Cronenberg is known for The Fly, Videodrome, Scanners, and Crimes of the Future, Brandon recently made a name for himself with the criminally underrated 2021 horror thriller Possessor. That film had an eerie body horror backdrop similar to his father’s rich library of work, but it added a thick sense of dreadful atmosphere that made many long-time horror fans’ skin crawl. Infinity Pool looks to continue that with the added touch of cloning mixed together with the director’s typical body horror madness.

It also helps that this film has a stellar cast. As stated before, Goth made a name for herself last year with A24’s hit horror films X and Pearl, but even before then, she was showing off her incredible range with films like Suspiria, Marrowbone, A Cure For Wellness, and the comedy gem Emma. Then there’s Skarsgärd who absolutely killed it recently in Robert Egger’s Viking epic and horror-adjacent film The Northman. All the pieces are here for Infinity Pool to be the genre’s next breakout hit. Neon, over the last number of years, like A24, has quietly made a name for itself as a studio that makes crazy unique films.

Infinity Pool is scaring its way to theaters on January 27, 2023. While horror fans anxiously wait for both Goth and Cronenberg to terrorize them all over again, you can view the intense new character posters down below.

“Only through blood can you release your past."
Brandon Cronenberg's INFINITY POOL
Jan 27
Get tickets: https://t.co/153zjapXj7 pic.twitter.com/L740cYle1c

The choice is simple: Clone you or kill you.
Alexander Skarsgård is James
Brandon Cronenberg's INFINITY POOL
Jan 27
Get tickets: https://t.co/153zjapXj7 pic.twitter.com/6PTZesC1v9

When there are no penalties there are no rules.
Mia Goth is Gabi
Brandon Cronenberg's INFINITY POOL
Jan 27
Get tickets: https://t.co/153zjapXj7 pic.twitter.com/NO1rwtIGop