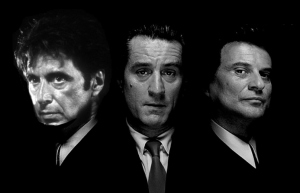 A long-gestating project might just be coming together ahead of Cannes, a movie that would reteam Oscar-winning director Martin Scorsese with his Goodfellas stars Robert De Niro and Joe Pesci, and would mark the first time that the director would work with Al Pacino. That’s huge. And the project is right up the organized crime-focused creative alley of all involved.

The Irishman, based on Charles Brandt’s true-crime book “I Heard You Paint Houses,” tells the deathbed story of mob hitman Frank “The Irishman” Sheeran, who had insider knowledge about the disappearance and death of Jimmy Hoffa. As Deadline reports, the movie is coming together quickly in order to shop it to international buyers at Cannes next week. That’s all contingent upon whether or not Paramount, which currently controls the project, signs off on the deal to sell international rights to Fabrica de Cine, the production banner which recently backed Scorsese’s Silence.

Whatever dollar figures come out of any potential deals are expected to be on the expensive side as The Irishman is rumored to have a $100 million-plus budget. One reason that a normally straightforward mob story would cost so much is that the film might use “Benjamin Button technology” to allow the older actors to appear in flashback scenes.

The aforementioned Silence is Scorsese’s next film which stars Liam Neeson, Adam Driver and Andrew Garfield. It’s based on the Shusaku Endo novel about 17th Century Jesuit priests who are persecuted while traveling to Japan as missionaries. That film opens in November of this year.

Here’s a look at the synopsis for Brandt’s book, “I Heard You Paint Houses” via Amazon:

The first words Jimmy Hoffa ever spoke to Frank “the Irishman” Sheeran were, “I heard you paint houses.” To paint a house is to kill a man. The paint is the blood that splatters on the walls and floors. In the course of nearly five years of recorded interviews Frank Sheeran confessed to Charles Brandt that he handled more than twenty-five hits for the mob, and for his friend Hoffa. Sheeran learned to kill in the U.S. Army, where he saw an astonishing 411 days of active combat duty in Italy during World War II. After returning home he became a hustler and hit man, working for legendary crime boss Russell Bufalino. Eventually he would rise to a position of such prominence that in a RICO suit then-U.S. Attorney Rudy Giuliani would name him as one of only two non-Italians on a list of 26 top mob figures. When Bufalino ordered Sheeran to kill Hoffa, he did the deed, knowing that if he had refused he would have been killed himself. Sheeran’s important and fascinating story includes new information on other famous murders, and provides rare insight to a chapter in American history. Charles Brandt has written a page-turner that is destined to become a true crime classic.