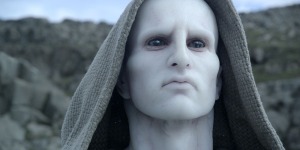 When Prometheus arrived back in 2012, nobody was expecting to meet the Engineers. Heralded as Ridley Scott‘s return to the Alien franchise he founded almost forty years ago, Prometheus steered clear of Alien‘s most famous iconography in favor of a new story set in the same world. And it wasn’t until the very end of the film that we started to see how that story tied into the mythology of the seminal sci-fi franchise.

In case you need a quick refresher, the Engineers were the giant, pasty-pale humanoid race at the heart of Prometheus‘ mysteries. They spawned human life on Earth, leaving clues scattered across the planet throughout history, which led Elizabeth Shaw (Noomi Rapace), David (Michael Fassbender), and the Weyland crew to the planet LV-223… where they discovered alien weapons of mass destruction and then pretty much everybody died. Except Shaw, who gave birth to a tentacled alien hybrid called the Trilobite thanks to David’s experiments and machinations. The Trilobite face-hugged an Engineer and boom, the Deacon — ostensibly an early relative of the Xenomorph — sliced its way out of the Engineer’s chest. Shaw and a recently decapitated David set out in search of the Engineer’s home planet, and that pretty much brings us up to speed.

Because the Engineers were such an unexpected and unusual addition to the franchise mythology, there’s been a lot of debate about whether the creatures will continue to play a role in Covenant. The answer to that is unequivocally yes. They may not be actively driving the story (it remains to be seen if there are any surviving Engineers by the time Covenant’s story begins), but their presence is felt consistently everywhere throughout the sets and set-up of the film.

There were three of those subjects on the set of Covenant: Elizabeth Shaw’s role in the film, rumored connections between Daniels and Ripley, and the Engineers. While the first two are to be expected, that last one is interesting because while no one was talking, The Engineers’ presence was evident at every turn.

Over the course of the day, we saw a lot of the Engineers. In the creature shop, we saw an artist painting the musculature of a flayed Engineer anatomical study in the style of traditional human dissection waxworks. In the “War Room”, we saw concept art and reference images for the Engineer’s world, where David has been keeping himself busy in the years since the Prometheus mission. Malformed trees with bulbous, puffing growths at the root, and crystallized rock formations with iridescent facets. Nature everywhere, and picturesque beauty that belies the deadly threats afoot. How deadly? Well, elsewhere, photos of Pompeii line the wall as reference images for the remains of the Engineer world, where a mysterious catastrophic event left the alien race in charred heaps that litter the landscape of their temple. Notably, the temple itself remains intact, causing one to wonder just what can burn an entire population to a crisp without damaging the building they’re in.

First, we saw a miniature scale model of that temple, the scorched corpses strewn across the stairs and walkways that lead inside outside of the Engineers temple. Shortly after, we paid a visit to a particularly stunning set called “The Hall of Heads,” a monumental section of the temple where the walls are lined with sculptures of giant, you guessed it, heads. And I do mean giant. The heads were easily taller than anyone standing in the room, each one a distinctly carved face glowering into the center of the sacred room. It’s evocative of the pyramids we saw on LV-223 in Prometheus but different, more weathered and less industrial. Where the pyramids were angular and slick, the Hall of heads is a rounded, earthy room. Scott told us the faces might be those of apostles, wise men — a superior people, while production designer Chris Seagers revealed that the heads were meant to give a sense of history and gravity to the sacred place… a place where the Engineers stored their information.

But there’s something larger at work here, too. If there was one thing that was made abundantly clear throughout the conversations on set, it’s that Covenant, like Prometheus, is very much rooted in the idea of creation myths. Who created David? Man. Who created man? The Engineers. But who created the Engineers? And what comes next in the chain? What does man’s creation create? Covenant is a film that looks to tell a broad-scale creation myth both backward and forwards at the same time. While it brings us closer to the events of Alien, to the birth of the biomechanical Xenomorph we all know and love, it also continues to look back at the story of human creation — a story we don’t understand nearly as well as we think we do from the story we were told in Prometheus.

At least that’s what we’re led to believe by Scott, who came to speak with us briefly while we were standing in the Hall of Heads. “We’ve reinvented the idea of Alien, which is that Covenant gets us a step closer to who and why was this thing designed to make human beings. And if you think it’s them,” Scott said, gesturing to the monolithic figures of the Engineers surrounding us, “you’re dead wrong.”

So what comes next and who came before? Those are mysteries yet to be discovered, but there’s no doubt that the Engineers are a key part of the answers.