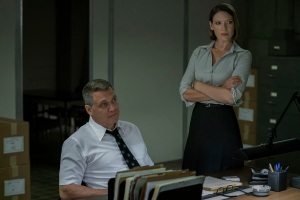 Netflix has unveiled a new trailer for Mindhunter, you know, the highly anticipated new drama series from executive producer David Fincher that comes out this Friday. Indeed, things have been fairly quiet on the Mindhunter front for the next project from one of the best directors working today. There have been a few trailers, sure, but it’s just odd there haven’t been many interviews or preview features in the pages of EW or elsewhere. Perhaps that’ll come post-release—Netflix is an enigma.

The series takes place in 1979 and revolves around the early days of the FBI’s serial killer profiles. Jonathan Groff and Holt McCallany play a pair of FBI agents who interview imprisoned serial killers in order to better understand how criminals like themselves think, which they then apply to solving ongoing crimes. This new trailer offers another somewhat brief look at the show, backed by Talking Heads’ “Psycho Killer” (nice), but it continues to look like a terrific spin on a procedural format. I know what I’m watching Friday night.

Fincher executive produces and directs some of the series, with Asif Kapadia (Amy), Tobias Lindholm (A War), and Andrew Douglas (The Amityville Horror) directing other episodes of the show. Joe Penhall (The Road) serves as the show’s creator, and it’ll be interesting to see what this first season entails and, given the Halloween timing, if it’s able to tap into the zeitgeist the way Fincher’s House of Cards did.

Check out the new Mindhunter trailer below. The series also stars Anna Torv and Hannah Gross. All episodes of the first season will be available to stream on Netflix on Friday, October 13th.

Here’s the official synopsis for Mindhunter: