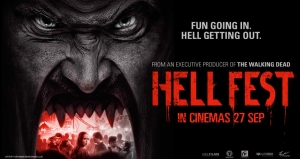 Synopsis – A masked serial killer turns a horror-themed amusement park into his own personal playground, terrorizing a group of friends while the rest of the patrons believe that it is all part of the show.

My Take – Thanks to the major success of director David Gordon Green‘s Halloween, it’s safe to say that the slasher genre is back for now, well that is until a bunch of unimaginative filmmakers run it into the ground once again like they did back in 90s. While I too agree that the genre of horror can’t be stagnant and has to change with time, but a well written story with a familiar background revolving around a bunch of people just trying fend off some guy who is trying to kill them, can turn out to be the absurd and dark fun fans are rightfully looking for.

As a result, this film, which released last weekend in the U.A.E alongside the sequel to the John Carpenter classic, will definitely not appeal to those looking for a new kind of horror film as it seems to be more proud of the fact that it’s trying to be nothing more than a typical slasher. But the problem lies in its very basic story line and the lack of scares (a major component for horror films).

Despite being passably entertaining, this film from director Gregory Plotkin, whose only feature-length film before this one was the poorly received 2015 film, Paranormal Activity: The Ghost Dimension, the film heavily relies on jump scares and becomes too predictable. Sure, the villain is creepy and the kills are gory, but the lack of a story line along with clichés of characters does affect the overall experience. 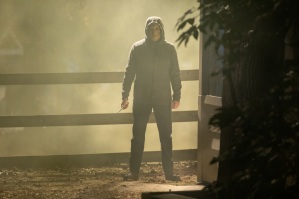 The story follows Natalie (Amy Forsyth), a young college student, who is down in the city to visit her former roommate and best friend Brooke (Reign Edwards), but is disappointing to see her former classmate Taylor (Bex Taylor-Klaus) also living with her. While Natalie’s sole purpose was to spend time with Brooke alone, she convinces her about joining the two roommates along with Quinn (Christian James), Brooke’s boyfriend, Taylor’s boyfriend Asher (Matt Mercurio), and their respective friend Gavin (Roby Attal) who is attracted to Natalie, to trip to Hell Fest, a horror theme park which travels across the country during the Halloween season, and to use their VIP passes.

While various people are coming to see the park filled scare actors, the group’s main attraction is to explore a particular maze known as the Deadlands, where the performers are allowed to touch and cross boundaries to scare. Unknown to them an unknown assailant has also entered the park with only one goal in mind – to kill as many unsuspecting visitors as he can. While the group stumbles upon him committing a murder, they consider it an act and let it be.

However their reaction peaks his interest as a result he starts stalking them around. While they dismiss him as a good actor at first, Natalie’s suspicions begin to rise as her friends start disappearing. Even when she tries talking to the security, they don’t seem to have a lot of options. Therefore, the further they get into the maze, the more Natalie feels like she has descended with her friends into hell.

With a doubt the film has a creative premise and we witness how the masked man goes on to kill each of the members in multiple ways, from smashing their head with a circus hammer, to attempting to use a guillotine to decapitate them. Although not 100% original, there have been a few films that have used this similar story before. Nevertheless, I was excited to see what this film could be and it was very disappointing. Why? Because despite its concept, it follows the basic formula and rules of just about every slasher film since the 1980’s. This film is exactly what one would expect from a cheesy slasher film: There are numerous scenes displaying bloody and gory violence, multiple slow-motion shots of the masked killer walking toward his victims and people falling while trying to get away.

The plot is barely established and is full of holes that are quickly disregarded once the actual slashing and violence starts. For example, Natalie discusses how she “isn’t around a lot” with other characters and the audience never finds out where she is in relation to her friends but are supposed to assume that they’ve all been close friends for a long time. Additionally, the motives of the masked man are never revealed, leaving the audience with nothing but speculation. I get it, there’s no way you want to compete with the most obvious figures in this genre Jason Voorhees or Michael Myers, but that’s not an excuse for you to wholesale take that imagery without providing the slightest hook. The reasons those two characters work is because, well, they’re characters. They have backstories and motivations, and their sense of presence comes entirely from that, you know why to fear them. 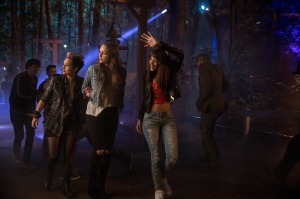 Our killer here is a nameless garden-variety psychopath, whose supernatural speed and strength seem out of place in this particular approach. If you’re going to the faceless whodunit route, your other characters have to pick up the slack, which the film isn’t really equipped to do, so the empty deaths and the anonymous killer make the entire film utterly generic. Additionally, the film is never really scary. It just never gets under your skin, and fails to build any sense of tension over its 89 minute run time. There were a couple moments here and there where I might have squirmed in my chair a bit, but nothing more than that.

Aside from one scene in a bathroom stall that makes competent use of high and low angles but never succeeds in creating claustrophobic suspense, Plotkin’s direction is functional yet over-emphatic, stretching the film’s brief running time with too much banter and too many shots of the killer patiently skulking around; the result is one long waiting game with no payoff. On TV, its prettified close-ups and rave lighting might even pass for proficient, but for a slasher film to transcend the basic formula, it needs to be pushed to extremes of style or outrageousness.

It is also filled with lots of clichés such as the character’s making stupid decisions, like trying to find an exit out of the park and thinks going inside one of the haunted houses is an exit. The latter half of the film devolves into maze after maze where our leads will be caught in, running from the killer, and it’s hard to tell them all apart, especially when they simply become jump-scare bait. It does little to set itself apart from other horror films until the last 20 minutes of the film. These last minutes not only provide the most intense and suspenseful sequence of the film, but also provide one of the best cliff-hangers in a film of this type, with an ending that sets up an opportunity for a sequel. Occasionally the film offers mild reversals of expectation, for instance, in a scene involving a prop guillotine, but these feel like jokes that don’t quite pay off.

But as far as slashers go, the film’s main strength is its setting, and production design. Despite the bunch of human characters, the park itself is the true star of this film. You don’t mind the scenes that don’t have the killer or action in it, because the place is so much fun. I’m surprised at the amount of production that went into this. This isn’t the case of a small area and the characters having to run through attractions introduced earlier in the film. Every location is new. Every employee costume is new. All the scares are new. Hell Fest, the park not the film, truly feels like a true amusement park one could step into.

The actor too try hard to portray the terror necessary but at times tend to also go over the top. The two standouts in this film are the leads, Amy Forsyth and Reign Edwards. Their chemistry on screen is apparent from the beginning, and their friendship comes to life toward the end of the film. But in supporting roles, Bex Taylor-Klaus, Christian James, Matt Mercurio and Roby Attal are just passable. Tony ‘Candy Man’ Todd surprisingly appears in a welcome cameo. On the whole, ‘Hell Fest’ is a passable slasher flick which despite bringing in genuine thrills into the mix never utilizes its cool setting in its favor.