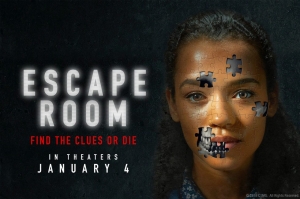 Synopsis – Six strangers find themselves in a maze of deadly mystery rooms, and must use their wits to survive.

My Take – Upon its release back in 2004, Saw, the James Wan directed horror film, brought back the trend of wimpy tongue-in-cheek horror that had dominated the 80s and the early 90s. More than anything, the twisted morality tale amidst the gore, brought in a rare level of psychological horror only previously seen in the very underrated, Cube (1997), a factor which also drew the non-gore fans towards the film despite what most critics had to say. Sadly, the very edge and gimmicks it brought grew stale, as sequel after sequel appeared to dilute the quality and originality. Soon terrible rip-offs came along and drowned the sub-genre to quite some extend.

While this latest psychological horror also doesn’t add much to the sub-genre, it does manage to bring back the fun element missing from this films. Most importantly, it takes advantage of the film’s inventive premise, capturing each new scenario with inspired stylistic choices and a well-orchestrated score, all making for an exceptionally twisted, tense and well-crafted thriller.

Here, director Adam Robitel (The Taking of Deborah Logan, Insidious: The Last Key) keeps the focus on the character designs, story integration and makes sure each room is clear in its concept and stakes, with well-conceived puzzles that leave very little room to actually judge. While I did have problems with how the film wrapped up in the last 10 minutes, but given the all the visuals and fun I had, the film is definitely worth a trip to the theater and certainly one of the better horror films to show up in a while, at least in terms of horror and thriller. 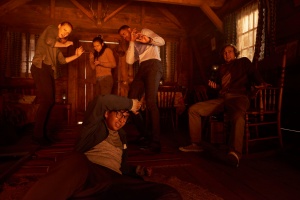 The story follows Zoey (Taylor Russell), an intellectual college student who is suffering from anxiety and can’t even cope with the smallest social interactions. While her professor is aware of her condition, he encourages her to move forward by doing something that actually scares her. She reels in this opportunity when she receives a puzzle box prescribing a cryptic note inviting her to the Minos Escape Room Facility, where she could win a cash prize of 10,000 dollars.

Meanwhile, Jason (Jay Ellis), a suave and go-getting stock broker with a survival-of-the-fittest philosophy of life and Ben (Logan Miller), a clerk with a drinking problem working for his uncle in the backroom of a hardware store, also receive the same invitations, and see this as a means to broaden their horizons.

Once they arrive at the facility they meet the other participants, Amanda (Deborah Ann Woll), an Iraq war-veteran, Mike (Tyler Labine), a struggling long-haul truck driver and Danny (Nik Dodani), a die-hard escape-room enthusiast. And before they know it the game begins right in the waiting room, and its volley of perils are alarmingly real — real heat and flame, real hypothermia, real claustrophobia and dizzying heights to fall from. With each room and puzzle solving involving a secret of their past. They figure out there is something bigger going on than just a game.

Scripted by Bragi Schut and Maria Melnik, the film offers a solid concept. While it doesn’t exactly scream originality, the film is a perfectly enjoyable little thriller. Personalities collide as a motley crew fights for survival in a twisted prison/puzzle where their lives are on the line. It’s basically an unofficial Cube remake, just broadly made. Which is cool, because instead of simple cells spiked with traps, the victims leap from one wild set-up to the next, offering a mind-bending adventure. Usually, these types of films fall victim to stale presentations and lack of originality. As such, the film’s approach was a nice twist on this film bringing with it a new creativity and approach that was refreshing.

The film’s PG-13 rating doesn’t allow for a lot of blood or gore, but it’s not missed, as Schut and Melnik‘s screenplay is much more attuned to focusing on the elaborate puzzles themselves, resulting in a film that intrigues rather than disturbs. A lot of that is due to the continuously, pleasantly surprising quality of its art direction. And what rooms they are! There is a broader and more intricate plot going on in the film, but, truthfully, it’s the rooms themselves that really stand out.

Each of the rooms had extraordinary detail, planned out to feel like the intense game of survival, filled with snares, baits, and clues to spur the threats on. Such design brought with it new arenas to engage your mind and held much more sustenance. First, the group is treated to a waiting area that turns into an easy bake oven as soon as they twist what they think is the dial that opens the door, and they have to find a way out before they’re incinerated.

Then they have to find their way out of a rapidly cooling snowy forest with a freezing river that threatens to swallow any one of them whole. One room is set up like a pool hall, with a fully stocked bar and mid-game billiards table, only, it’s upside down. No opportunity is wasted in rotating the camera between upright and topsy-turvy, to confuse the eye and throw the audience off balance.

Below their feet, a dingy hospital bunker, and a white static sound room that may not be for the sensitive audience that cannot handle flashy dizzying lights to a Victorian drawing room full of antiques that slowly crushes anyone inside. The choreography adds layers of visual fascination to already interesting scenes.

But what further advanced the story were the characters, contenders who for once had more dimension than simple, snobbish, cannon fodder that often take center stage. These players held backstories, opportunities to learn, and personalities that evolved with each passing minute. There’s a delicious liveliness to their chemistry as they bicker and bond, and soon you feel like one of the group. When Mike threatens to slap a sulking Ben “like (his) parents should have!”—you’ll chuckle along with a tickled Amanda.

When they uncover a hard-sought clue, you’ll feel a rush of exhilaration. And when you witness one after another face a brutal end, you might cry out in helpless despair, just as their surviving teammates do! As characters are facing danger in every room. Director Adam Robitel does well to make you feel claustrophobic.

Sure, the writing is not without clichés. For example, Jason constantly mocks escape room fan Danny for being a sexless, game-loving loser, which is a weird choice for a film about games, and the transformation of Zoe from shy Brainiac to badass isn’t entirely convincing, even the big bad’s motivation reveal feels very familiar, yet considering everything it’s satisfying to see everything play out.

However, what brings the film quite a few notches down is its climax, which is nothing short of senseless, lazily written, and worst of all casually deals out a heinous political subtext. The arc of the story ends long before the film does, with the last 15 minutes spent setting up the next entry in a likely long-running franchise. The film’s final button is hilariously portentous and pleasantly disorienting, a final pirouette of the simulation-upon-simulation antics that the film’s been playing with all along. It plays out in a largely formulaic manor before reaching its sequel-bait of an ending, which is a shame considering how much good-will the film had before these final moments.

Performances wise, each member of the cast ranging from Taylor Russell to Logan Miller, and the rest, Deborah Ann Woll, Tyler Labine, Jay Ellis, Yorick van Wageningen and Nik Dodani play their parts well, considering the limited scope of performance in such kind of a format. On the whole, ‘Escape Room’ is an enjoyable psychological horror which despite a few nonsensical elements offers enough fun little thrills.