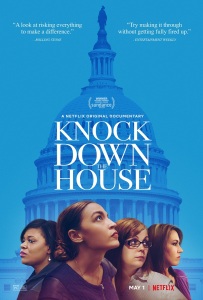 Netflix has released the first trailer for the upcoming documentary Knock Down the House, which chronicles the campaigns of four women who ran for office during the 2018 midterm elections. Alexandria Ocasio-Cortez is probably the most well-known of the group, as the Bronx native famously unseated an incumbent for the U.S. House of Representatives. But the film also covers the campaigns of Amy Vilela, Cori Bush, and Paula Jean Swearengin.

It’s no coincidence that the film’s focus is on not just women, but women who had no designs to become career politicians. Indeed, Knock Down the House appears to take aim at typical, working class Americans who got fed up with representatives who were straying further and further away from their values and decided to run for office themselves.

Check out the Knock Down the House trailer below. The film won the Audience Award at the Sundance Film Festival and premieres on Netflix and in select theaters on May 1st.

Here’s the official synopsis for Knock Down the House:

Four exceptional women mount grassroots campaigns against powerful incumbents in Knock Down the House, an inspiring look at the 2018 midterm elections that tipped the balance of power. When tragedy struck her family in the middle of the financial crisis, Bronx-born Alexandria Ocasio-Cortez had to work double shifts as a bartender to save her home from foreclosure. After losing a loved one to a preventable medical condition, Amy Vilela didn’t know what to do with the anger she felt about America’s broken health care system. Cori Bush, a registered nurse and pastor, was drawn to the streets when the police shooting of an unarmed black man brought protests and tanks into her neighborhood. A coal miner’s daughter, Paula Jean Swearengin was fed up with watching her friends and family suffer from the environmental effects of the coal industry.