Synopsis – A secluded farm is struck by a strange meteorite which has apocalyptic consequences for the family living there and possibly the world.

My Take – Despite passing away 83 years ago, works of American writer, H.P. Lovecraft, continue to be looked upon for inspiration by authors looking to craft tales, fused with science fiction horror mainly based on one’s incomprehensible fear of the cosmic unknown. However, unlike other authors, his stories have rarely found success on the big screen, with the exception of the Re-Animator series, mainly as the filmmakers involved often found themselves accused of not understanding the scope required to translate Lovecraft‘s genuinely horrifying writing.

Hence, when it was announced that South African filmmaker Richard Stanley, known for his groundbreaking early 1990s genre work, and for getting fired from the infamous The Island of Dr. Moreau (1996), was going to mark his directorial return, after 24 years, with a modernized adaptation of a 1927 short story, which is often regarded as one of H.P. Lovecraft’s most challenging stories, in the form of a trippy slice of cerebral horror, it sounded like an audacious yet thrilling idea.

With his first genius move being handing over the lead role to Nicolas Cage, who over the last decade has relegated himself to appearing only in smaller direct to video films, where he hams it up, no matter the requirement of the script or not. Nevertheless, despite this combination, Lovecraft fans can be rest assured that this is possibly the best direct adaptation of the weird fiction writer’s seminal work.

Backed by the producers of Cage‘s 2018 rare critical success, Mandy, this film, as promised, is a messed up bonkers film that mixes humor with body horror to deliver an overblown freewheeling sci-fi horror film in the lines of what filmmakers like John Carpenter and David Cronenberg used to make back in the 80s. The film, expectedly, also gives Nicolas Cage full opportunity to go full-Cage, and boy does he lean into it.

Though the film suffers from some narrative and thematic issues, the visuals are beautiful and disturbing, and the wild, strange silliness happening on the screen never fails to entertain.

Set on the countryside of Arkham, Massachusetts (the fictitious setting of many Lovecraftian stories), the story follows Nathan Gardner (Nicolas Cage), who has just moved his family into his father’s old farmstead, with an aim to embrace rural life by raising alpacas on the property’s farm.

For his sake, the family is also adjusting to the change. His wife Theresa (Joely Richardson), a financial adviser, is trying to maintain her job despite having no internet connection; their teenage son Benny (Brendan Meyer) is smoking even more pot than usual; their teenage daughter Lavinia (Madeleine Arthur) is taking the wild country landscape as an excuse to fully commit to Wicca, a modern Pagan religion; however their youngest, Jack (Julian Hilliard) doesn’t seem to mind the relocation.

That is until, on an otherwise normal night, the sky fills with pulsating light and a meteorite crashes onto their land. Even though, overnight, it cools and vanishes, strange occurrences begin to persist in its absence. New flora and fauna appear, all slightly alien, the alpacas keep escaping, and the radios emit an unsettling crackle.

Even the water in the area begins to change, a fact duly noted by Ward (Elliot Knight), a young hydrologist, who is in town surveying the water table for a hydroelectric dam plan. However, things start to spiral out of control when the family members themselves begin to show signs of unnatural change.

As obvious from its source material, the film is an unapologetic ally over-the-top spectacle on heroic doses of camp, but its world building and atmosphere are surprisingly subtle, haunting and evocative. The film’s titular menace is downright stunning as it sweeps through the local fauna and overtakes the sky. The woods that surround the Gardner compound are suitably unsettling.

Here, director Stanley updates the material by tapping into contemporary anxiety about environmental disasters, specifically tainted water. Director Stanley underlines this theme heavily enough that it’s impossible to miss, placing glasses of water in the foreground even before the pulsating brain falls out of the sky and starts spitting out rainbows whose touch burns like radiation.

While things do get progressively more surreal, it’s surprising how remarkably grounded he kept the narrative, shying away from taking things into a truly cerebral state of madness and terror and delivering a somewhat straight-forward piece of horror that’s far less risky than one might expect. 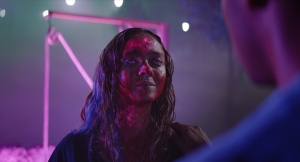 The fear in this film isn’t just the body horror; it’s that there is genuinely nothing you could do to stop this plague from infesting your home and your mind. The more you try and understand what’s happening, the more horrified you feel when you get your answers. He captured the horror that comes from being attacked and manipulated by forces foreign to your imagination. His interpretation of this color, described as something outside the realm of human comprehension, an entirely new color, is a luminous pink, rapidly spreading its stunning, yet horrific aura over everything.

But as soon as the third act kicks in, the film abandons all sense of restraint and goes completely insane, with the body horror which has threatened to break through from the earliest moments finally unleashed, foregrounding the exceptional work of special effects supervisor/creature designer Dan Martin. The body-horror in the film’s last act will appeal to fans of the grotesque, whilst the film is ridiculous on many levels, but it’s extremely well realized and well made (for its low budget), and is to be applauded for not trying to attach an explicit meaning to a story which avoids any kind of thematic specificity.

That being said, the film is rough around the edges, particularly in a subplot involving a small-town mayor and a big-money reservoir project, which goes nowhere by the end of the film. The pacing may also not work for everyone. Also for a serious film, there certainly are laugh-out-loud occasions and times of darker reflection, but rather than thicken this script with greater detail, focus is placed on making the film appeal to a cult audience, making it more comical, infusing more Cage and outrageous moments as the film walks down the path to insanity.

While the performances all around were great, Nicolas Cage was the clear standout. His descent into insanity felt natural, as he would effortlessly shift between caring husband and father to a madman. There’s also an extended scene involving him milking an alpaca, so it’s got that too.

The rest of the cast attempt to match his energy and make a commendable effort, with Joely Richardson, Elliot Knight, Madeleine Arthur, Julian Hilliard and Brendan Meyer delivering solid, memorable performances. Tommy Chong’s brief appearance as Ezra, the hippy who lives by the family’s house, is also memorable, while Qorianka Kilcher is wasted. On the whole, ‘Color Out of Space’ is a demented horror film which despite its oddities manages to be breathtaking, jaw-dropping, and horrifying.