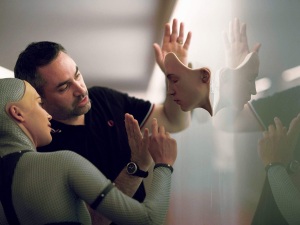 Now that fans have had a chance to catch up with Alex Garland‘s sci-fi series Devs, the British filmmaker is prepping his next feature, and I’m already excited.

Empire reports that Garland wrote and will direct a low-budget horror movie that will be set in the UK. There’s no title yet, and Garland is still lining up financing, but he’s hoping to start production this coming spring or summer, depending on cast availability.

“I wrote a low-budget horror movie, set in the UK,” Garland told Empire in the most recent issue. “I don’t know if it’s unrealistic or not. Always at this particular moment, a film always feels unrealistic, but then somehow it works out.”

Garland is the acclaimed screenwriter behind Danny Boyle‘s 28 Days Later and Sunshine, as well as Dredd and Never Let Me Go. He made his directorial debut with the 2014 thriller Ex Machina starring Domnhall Gleeson, Alicia Vikander and Oscar Isaac before moving on to the sci-fi horror movie Annihilation starring Natalie Portman and Isaac.

The Oscar-nominated writer had been planning a new TV series about the ineffectual and surface-level state of protests in recent years, but that idea went out the window following the events of this summer, when millions of people around the world took to the streets in support of Black Lives Matter following the death of George Floyd.

“At some point with civil disobedience, you have to start smashing stuff up. So I was writing about the need to smash stuff up,” explained Garland. But once he saw the palpable anger that was alive in the streets of both major cities and small towns, he felt there was no need for the series, which could have featured several actors from Devs.

“I thought, ‘So now what I’m writing is pointless.’ In a good way. I almost felt glad, weirdly.” That’s when Garland decided to pivot to the new horror movie.

I’m actually relieved to see Garland return to the world of features, as Devs was tough to get into. He served as creator, writer, director and showrunner on the cerebral series, and while some swore by it, others found the material hard to penetrate. I watched an episode or two and found it just wasn’t for me. It seems my patience is wearing thin in my old age, and gone are are the days when I’d take a friend’s word that I just had to give The Wire five episodes before things picked up. The TV landscape is simply too competitive these days. You have to hook audiences right from the start, because that second episode is no longer a given.

But that’s just one man’s perspective.