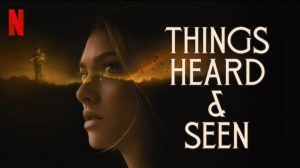 Synopsis – An artist relocates to the Hudson Valley and begins to suspect that her marriage has a sinister darkness, one that rivals her new home’s history.

My Take – Like most I too enjoy a simple ghost story, something which I exactly expected from this latest Netflix release, which based on author Elizabeth Brundage’s 2016 novel All Things Cease to Appear, spends most of its runtime building an unconventional ghost story out of an entirely conventional relationship drama.

Being remarkably well-paced, something very uncommon in book-to-film adaptions, and backed by an intriguing mystery and a talented cast, the film is mostly a compelling watch, well that is until the last act kicks in, and tarnishes all the efforts of the juggling interpersonal drama and the murderous ghost story, making this yet another missed opportunity.

The way the narrative falls apart is a particular shame, since the slow burn horror story limits the cheap shocks and jump scares, and replaces them with its own unusual rules for the supernatural, but directors Shari Springer Berman and Robert Pulcini (American Splendour) seem suspended about narrative concerns, as they chose to end their tale as a collage of evocative imagery that takes the pieces of the wreckage of the film’s story and fashions them into something wholly odd, unnecessarily pushing it past the breaking point. 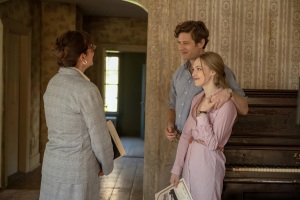 The story follows Catherine Claire (Amanda Seyfried) and George Claire (James Norton), a young Manhattan couple who along with their young daughter, Franny, move to the fictional small town of Chosen, New York, so he can start a new job as professor of art history at a small college. Though Catherine, an artist with bulimia, is reluctant at first, she soon settles into their new life by occupying her time with restoring their dilapidated home with the help of brothers, Eddy (Alex Neustaedter) and Cole (Jack Gore), who seem to have a secret connection with the house.

Meanwhile, George too falls into the rhythms of his new job with amazing ease, as his glib and effortless charm sees him quickly surrounded by a following of female students and in a sordid affair with a local girl, Willis (Natalie Dyer). That is until, Catherine begins to look into the history of her beautiful new home, uncovering its dark history and its connection to her husband’s unwrapped secrets.

By all accounts the plot is the typical slow burn horror, mixed with marital infidelity, psychotic husbands, dramatic car crashes, and a creaky old house with a mysterious past, which follows usual haunted-house rules like flickering lights, female apparitions in the kid’s room and objects move around without being touched. To the film’s credit, though, it does attempt to tackle something interestingly.

For example, Catherine doesn’t seem particularly unnerved by the apparition or the thought of a ghost in her house. She immediately starts to sympathize, and when George’s boss Floyd DeBeers (F. Murray Abraham) gives her his warm and supportive theories on spiritualism, she’s immediately in favor of a secret séance with a bunch of strangers.

However, the most engaging element of the film is to witness the marriage disintegrate. To the film’s credit, though, it does attempt to tackle some interesting ideas – especially when it comes to the main couple, Catherine and George. Catherine and George’s marriage looks an awful lot like other similarly fraying relationships in other horror films. With the husband being the liar and a cheat who is quick to blame his choices on her behavior. Meanwhile, she too is mostly unfair to him, overreacting to small issues, and concealing how miserable she is, especially the sufferings of her eating disorder.

Sure, it’s not exactly marriage-as-survival-horror, but it does make a marriage flying off the rails pretty darned watchable. The otherworldly force in the house and the house’s mysteries matter little to the film, as some are dropped immediately after being introduced, some are dropped halfway through the film, and some lead down a rabbit hole just to never be mentioned again. Mainly because the narrative wants us to focus and blame their conflict and their resentments to everything that is happening to them.

And then there’s the terrible last act, which not only assumes the audience has utterly internalized the film’s invented rules for the supernatural, but can intuit many more of them as well. Yes, the film was never going to be a great film, it was always going to be at best good, an enjoyable way to waste away a couple of hours. Being a horror film with so little horror was always going to be a problem, but goodness gracious, that ending. It takes a special kind of bad ending to wreck an entire film viewing experience.

Thankfully, the performances are up to the mark. Amanda Seyfried is suitable as the paranoia and anxiety-ridden Catherine and makes for a formidable lead, as transforms from fragile and vulnerable to steely eyed as she tries to separate truth from lies. James Norton never tries to make George anything but unlikable, in fact that his character is so balls-to-the-wall nuts, it would have been very hard to make him boring.

In supporting turns, F. Murray Abraham and Rhea Seehorn make most of their screen time, while Alex Neustaedter and Natalia Dyer are forced to work through poorly written characters. In smaller roles, Karen Allen and Michael O’Keefe are wasted. On the whole, ‘Things Heard & Seen’ is a middling horror-thrillers let down by its lackluster final act.