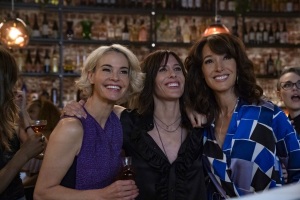 Showtime has released the official trailer for Season 2 of The L Word: Generation Q. The second season will debut on non-linear platforms, available on streaming and on-demand, with its first new episode on Friday, August 6, while the show makes its on-air return on Showtime on August 8.

The L Word: Generation Q is all about sex, love, and more sex — among other things — and the trailer lets fans know that those who are coming back for more will not be disappointed. The ensemble cast, made up of characters from the original L Word series as well as newcomers, discuss infidelity in their relationships, fears of dying alone, and making the brave decision to take the plunge in love — despite the obvious risk of heartbreak.

The L Word: Generation Q is a successor to — and in many ways, a continuation of — the original story from its predecessor series. It’s all about the romantic trials and tribulations of Bette Porter (Jennifer Beals), Shane McCutcheon (Katherine Moennig), Alice Pieszecki (Leisha Hailey), Dani Núñez (Arienne Mandi), Gigi Ghorbani (Sepideh Moafi), Michah Lee (Leo Sheng), Sarah Finley (Jacqueline Toboni), Sophie Suarez (Rosanny Zayas), and Angelica “Angie” Porter-Kennard (Jordan Hall) as they figure out what they want out of their romantic relationships. The first season debuted in December 2019 to wide critical acclaim.

Fans have been waiting for Season 2 since early 2020 — but soon, the wait will be over. The Season 2 premiere of The L Word: Generation Q will drop August 6 on streaming and on-demand, before airing linearly on August 8. Meanwhile, the first five episodes of Season 2 will air Sunday nights on Showtime, with the final five episodes of the season airing Monday nights at 9 p.m. ET until the season finale on October 11. Check out the trailer below:

This season of THE L WORD: GENERATION Q kicks off in the aftermath of Sophie’s (Rosanny Zayas) decision at the airport as she, Dani (Arienne Mandi), and Finley (Jacqueline Toboni) are all left to pick up the pieces. Meanwhile, Bette’s (Jennifer Beals) personal and professional pursuits force her to reexamine her roots — something Angie (Jordan Hull) also questions and explores in her own way. In the wake of her divorce, Shane (Katherine Moennig) throws herself into finding new ways to keep the bar thriving, while Alice (Leisha Hailey) is surprised when writing her first book steers her whole life in a new direction. Micah (Leo Sheng) is pushed to reckon with his identity as he navigates big changes in his career and love life, while Gigi’s (Sepideh Moafi) journey to move on from Nat (guest star Stephanie Allynne) and Alice takes an unexpected turn.