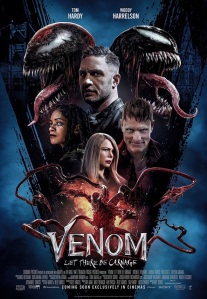 The Venom sequel will see the return of Tom Hardy starring as Eddie Brock and his symbiote Venom, and will properly introduce serial killer Cletus Kasady, played by Woody Harrelson, who was briefly seen in Venom’s post-credit scene, and will become the host for the symbiote Carnage. The movie will take place one year after the events of the first film, and will see Eddie Brock still adjusting to his life as the host of the Venom symbiote. He attempts to reignite his journalism career by interviewing Kasady, which leads to him becoming the host of the Carnage symbiote, and escaping prison after a failed execution attempt.

Along with Hardy, Michelle Williams will be reprising her role as Anne Weying, a district attorney and Eddie’s ex-fiancé. Weying’s current fiancé Dan Lewis will be returning as well, played by Reid Scott. In addition to introducing Carnage,Venom: Let There Carnage will also introduce the symbiote Shriek, who will be played by Naomie Harris. Stephen Graham will be in the movie as well as Mulligan, who’s a detective trying to find the remains of Kasady’s victims, and Peggy Lu will be reprising her role as the convenience store owner Mrs. Chen.

Venom: Let There Be Carnage was originally set to come out on October 2020, however that release had to be delayed due to the COVID-19 pandemic. The movie will now be released in theaters on October 15, 2021, roughly a year later.