Just like with the character origins and the earlier ancestral breed of Hobbit, the Harfoots, the creators of The Lord of the Rings: The Rings of Power have taken great care in bringing Tolkien‘s Second Age of Middle Earth to the screen once more with the Second Age Orcs. In an interview with IGN, head of the prosthetic department Jamie Wilson and executive producer Lindsey Weber discussed the thought process and choices made to adequately bring the “baby versions” of Orcs to actuality.

For every race of Middle Earth showrunners Patrick McKay and John D. Payne and the Rings of Power team had to keep in mind that they were bringing familiar characters back to fans as they’d never been seen before. As for Orcs, their story began somewhere, too, long before Sauron utilized them for his armies. For the creators of Rings of Power, “It was really important to them to treat them as their own culture and explore their world on its own two legs in its own right.” This means that post the Orc’s mysterious First Age creation, but before they were amassed in great numbers, Wilson was tasked with creating groups of Orcs that are “a lot more smooth texture. There’s still wrinkles, and lines, and shape, and form, but they’re not so battle scarred, but they are dealing with some skin conditions because of their exposure to the sun.” Bringing these creatures back to the Second Age as close to source material as possible was so important that Orcs were the very first page of what Weber referred to as McKay and Payne’s bible.

Wilson explained the reason for the Orcs’ new look:

“We spent a lot of time talking about what it would mean to be an Orc in the Second Age. It felt appropriate that their look would be different, part of a wilder, more raw, Second Age, Middle-earth, closer to where the First Age ends. As we meet them, they’re not yet organized into armies, they’re a little more scattered and they’ve been scavenging. So it’s just a different time in their total story.”

In Rings of Power the Orcs fans will see are the generations that grew up deep in the tunnels beneath Middle Earth. They are scavengers, and broken up into small groups after the decimation of the War of Wrath, their numbers severely dwindled. In the Second Age the Orcs are creeping their way back up to the surface under “a so-called new leader who’s going to lead them forward.” These particular Orcs differ from the Third Age in a new, surprising way, as well. According to Weber we’ll get to see female Orcs and, “one Orc in particular, who’s very, very tall and strong, who has a particularly enjoyable fight with one of our Elven characters that I suspect will be, or hope will be a favorite among fans.”

Since the battle-worn Orcs in Peter Jackson‘s The Lord of the Rings: The Fellowship of the Ring in 2001, the quality of prosthetics was great for its time, but the foam latex had nothing on the “encapsulated silicon” Wilson is able to make use of today. The new materials work with the actors, moving with their skin and reaching the same temperature as the actor’s skin, growing transparent, making the application of the intense Orc makeup that much simpler. Due to the wear and tear of such prosthetics, Weber and Wilson praise the use of the practical effects with CGI. Wilson said, “A lot of stuff with prosthetics is beasts and creatures that then need further enhancements or whatever. So there was a very close link.” Any close-ups will be almost exclusively practical, while the larger groups fans see onscreen will be a “marriage” of both.

As for the creation of Orcs, the First Age stuff, Weber and Wilson are keeping that under wraps. Only time will tell if fans will get to see the mysterious creation of Orcs. The Lord of the Rings: The Rings of Power will premiere on Prime Video on September 2. Check out the brand-new photos below: 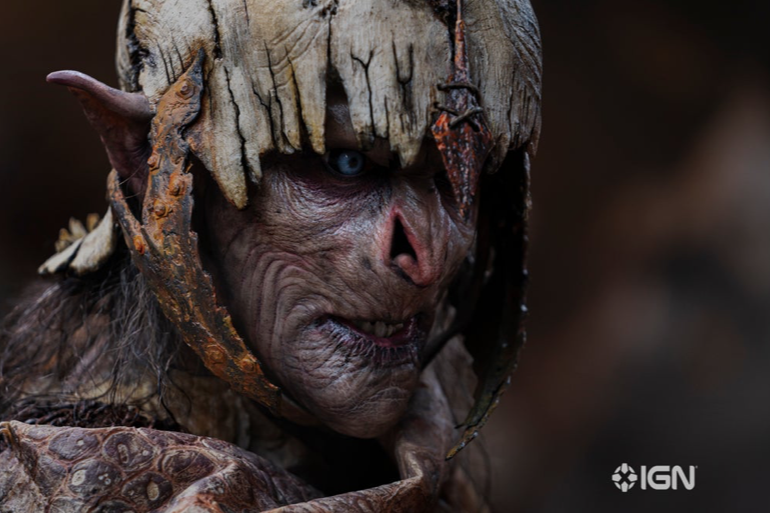