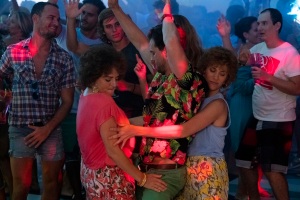 Deadline reports that the untitled film will be a fairy tale musical comedy that re-imagines the classic Cinderella story from the point of view of the Disney princess’ wicked stepsisters, Anastasia and Drizella Tremaine, as they struggle to uphold their family’s legacy. The story will follow them from their early childhood through Cinderella’s marriage to Prince Charming and beyond.

Since the project is still in early development, it has yet to be decided whether Wiig and Mumolo will star in the film, which is being produced by Will Ferrell and Jessica Elbaum of Gloria Sanchez Productions.

Just as Warner Bros. and Sony have embraced movies about villains between Joker and Venom, respectively, so too has Disney, which is currently prepping the release of Cruella starring Emma Stone as 101 Dalmatians villain Cruella de Vil. The studio is also developing a Beauty and the Beast prequel series for Disney+ that will follow the adventures of Gaston (Luke Evans) and LeFou (Josh Gad).

Wiig and Mumolo earned an Oscar nomination for writing Bridesmaids together, though their partnership goes all the way back to the Groundlings, where they each honed their comedy craft and quickly became friends. Deadline reports that Barb & Star outperformed Lionsgate‘s internal expectations when the film was released on premium VOD this past February, though it still seems to be stuck in limbo as far as Golden Globes eligibility is concerned.

Wiig is coming off her own villainous turn as Cheetah in Wonder Woman 1984, and she’s slated to spend the summer filming Peacock‘s Macgruber series with her old SNL cohort Will Forte. She’s also set to lend her voice to the next installment of the Despicable Me franchise.

Mumolo‘s feature credits include Judd Apatow’s This Is 40, STX‘s hit comedy Bad Moms and the Melissa McCarthy movie The Boss, and she’ll soon be seen alongside Kristen Bell once again in the counterfeit coupon comedy Queenpins. She and Wiig share a special chemistry together, so I kinda hope they wind up starring in this Cinderella spinoff, and I’m eager to see they bring in to direct as well.