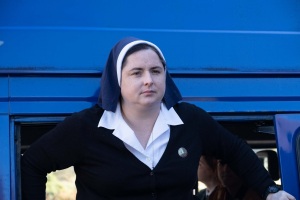 The upcoming original Disney+ comedy series Extraordinary casts Siobhán McSweeney (Derry Girls), and Máiréad Tyers, star of the upcoming film Belfast for a first season consisting of eight episodes. The show is among a number of U.K.-based shows the streamer has announced for the platform alongside The Ballad of Renegade Nell and Wedding Season.

Extraordinary focuses on a young woman named Jen (Tyers) as she struggles to find her place in a world where everyone but her has superpowers. The series is described as a “fresh, innovative comedy” centering around a coming-of-age story and celebrating your own strengths. The series is written by newcomer Emma Moran and produced by Killing Eve’s Sid Gentle Films. Sally Woodward Gentle of Sid Gentle Films praised Moran’s writing ability describing her as,

“An extraordinary new writer with a brilliantly distinctive and ingenious voice. This genre curve-ball will chime with the crises everyone carries with them through their neuroses fueled lives. We love it and are delighted that Liam and the team at Disney Plus are behind us.”

Filming, which began today, will be set in London. Gentle, Lee Morris, and Charles Dawson serves as executive producers with the series being directed by Toby MacDonald and Jennifer Sheridan. One episode is stated to be directed by Nadira Amrani.

No details have been given regarding the shows release date. However, the show will premiere within the streaming service’s hub Star, which is known for housing content made for general audiences as opposed to the younger demographic Disney is known for. The announcement for Extraordinary comes just a few weeks after reported heated debates between executives about creating more adult-focused content.