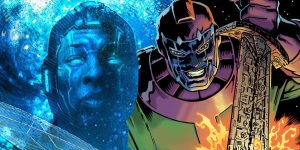 It looks like the fifth Avengers film has found its writer. It was announced today by Deadline that Ant-man and the Wasp: Quantumania scribe Jeff Loveness has been tapped to write the film, titled Avengers: The Kang Dynasty, which is set to release in 2025.

As the title suggests, the film is expected to follow Kang the Conqueror (Jonathan Majors), who was first introduced to the MCU in last year’s Loki, when the titular god of mischief (Tom Hiddleston) and his Variant and new ally Sylvie (Sophia Di Martino) journey to the Citadel at the End of Time and find “He Who Remains,” aka Kang, waiting for them. Their actions there are part of what causes the timeline to fracture, unleashing a multiversal mayhem.

Kang is also set to appear in the upcoming Ant-Man and the Wasp: Quantumania. A trailer recently shown exclusively at D23 revealed that when Scott Lang (Paul Rudd), his daughter Cassie (Kathryn Newton), Hope Van Dyne (Evangeline Lilly) and her parents Hank (Michael Douglas) and Janet (Michelle Pfeiffer) are pulled into the Quantum Realm, they encounter a sinister Kang there waiting for them.

With Loveness set to write both Ant-Man and the Wasp: Quantumania and now Avengers: The Kang Dynasty, it seems likely that both projects will be more deeply connected that simply existing in the same cinematic universe. With Kang also having taken over the Time Variance Authority in Loki, it’s likely he is shaping up to be a big bad (if not the big bad) of this new phase of Marvel stories, and having the same writer across two such crucial projects will bring an extra level of consistency to the story.

Avengers: The Kang Dynasty is expected to hit theaters in 2025. In the meantime, Loveness‘ other project Ant-man and the Wasp: Quantumania will be released on February 17, 2023.